On being young in the outer suburbs

I grew up in the outer suburbs of Melbourne. Back then (way back then), I lived in a brick veneer house in a new development. On the other side of the single lane road were paddocks and from a few blocks up you could see the city skyline across 35 kilometres of flat, vacant land.

I was lucky enough to get a place at university, helped along by a program designed to include kids like me – from the wrong side of the tracks, from the ‘vast wastelands of urban sprawl’ (a term used by some highly educated people to this very day).

Back then I was playing out a common scenario, as the two hour public transport commute each way to university started out as an exciting adventure for a 17 year old, but became a near-impossibility for a 20 year old with two part-time jobs. I only just scraped through my final year of study.

Some things have changed over the years. The road outside the house where my parents still live is now six lanes wide. The 35 kilometres to Melbourne is now completely filled by houses, shopping centres, medical centres, schools, arterial roads - and people.

Some things haven’t changed though.

Many young people from the outer suburbs still do not have a clear line of sight – connection – to tertiary study or career pathways. Entry to university (particularly a sandstone) is still impeded by the impact of attending an overcrowded and underfunded high school; by the commute that is not only burdensome but these days can also be dangerous (think walk-tram-train-bus-walk after an evening lecture). Youth unemployment and disengagement remains higher than the national average – and will continue to grow post-COVID, echoing the impact of the ‘recession we had to have’.

The data backs up the lived experience.

New developments with thousands of houses are still being constructed with no public transport connections – a further 10 or 15 kilometres out from where my family settled in their new house in the 1980s. TAFE and University campuses are still either non-existent or at risk due to lack of policy direction and funding, compounded by COVID-19.

There are around 1.7 million people under the age of 25 living in Australia’s outer suburbs today. What will their future hold? What type of education and career opportunities will they get, will they miss out on, will they never even realise existed?

Join us in a public webinar about young people in the outer suburbs after COVID-19 - more here. 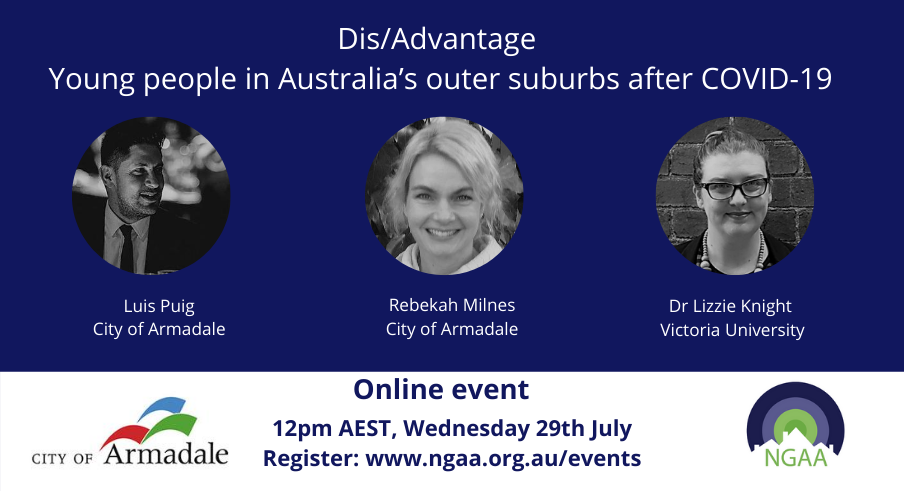 Infrastructure Australia’s 2021 Australian Infrastructure Plan provides a clear way forward for the equitable delivery of infrastructure – particularly in new communities in growth areas where the scale of the infrastructure gap is vast and widening faster due to the stimulus-driven housing boom.

Three days, 26 presenters and more than 190 delegates - the 2021 NGAA Symposium: Research and Practice from Australia’s growth areas was a resounding success.

The Commuter Car Parks Project has been a real concern for NGAA due to a lack of transparency and consultation. The Auditor-General’s report concurs: this was a missed opportunity for growth areas.